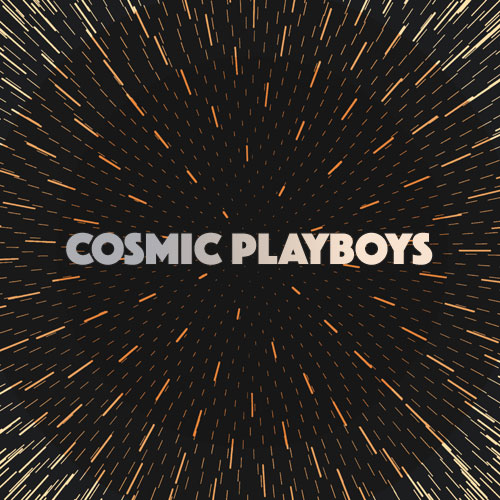 Jerry and I are proud to announce the release of the debut album of the Cosmic Playboys after more than two years putting it all together. After years of heavy prog and jazz fusion, we wanted to be in a rock and pop band and play songs again, with horns and vocals and catchy, thoughtful lyrics and stuff. This is our modern¬†take on the jazz, funk, and soul influenced pop bands (and one in particular, ahem…) of the late 70s and early 80s that were¬†on the radio when we were kids.¬†That is to say, it’s Yacht Rock, only with balls. We did it up right too, using¬†any¬†and all of the best and most brilliant¬†players we knew¬†who would actually agree to play with us!¬†The bass duties were handled by the great young Chicago prodigy John Lauler of the Giving Trio, Time and the New Romans, and (formerly) Marbin, just name a few. John is also our bass player for the live band and really our third partner in this and other projects;¬†in it for the long haul, and a fine hairless ape by all accounts. The absolutely amazing and peerless¬†vocalist Carla Prather of Poi Dog Pondering and of her own fantastic band handled all of the harmonies and and will join us as part of the live band moving forward as well, thanks Carla!¬†Guest¬†appearances by Chicago and national music luminaries include Paul Martens who brilliantly handled horn charts on several tunes (Poi Dog Pondering, Brian Wilson), the one and only and always incendiary saxophonist Mars Williams (Psychedelic Furs, Liquid Soul), Doug Corcoran who lays trumpet here but there isn’t an instrument he doesn’t kick ass on (JD McPherson, Liquid Soul), David “Max” Crawford (Poi Dog Pondering), and Dylan Rehm. Lastly and as always we owe a debt to our longtime buddy and producer, the great Ellis Clark of Epicycle and Ellis Clark and the Big Parade¬†fame, who added this record to the hundreds that have come out of his studio and from his incredible musical talent, blood, sweat, and tears (he played all the keys too!). This is as much your album as ours.

Available for digital download at all the usual suspects; iTunes, Amazon, google, spotify, and BandCamp, listen to some preview tracks at Soundcloud as well. Looks for links on the music portion of the website; give us a listen first, then have at it. CD version and other Merchandise available in early 2016. Anyone looking for vinyl? We’re inquiring on demand, drop us a line on the Contact page and let us know how you feel. Cheers and Happy Holidays!